After a year long hiatus from cycling after Tour Divide in 2015, an opportunity to try something new presented itself. Adventure racing. The world championships of adventure racing was happening right on my backdoor step in Ulladulla, Australia.

Expedition length adventure racing is an adventure race course run over many days (typically 5-10 days) and consisting of many disciplines. The main disciplines are hiking, mountain biking and kayaking, however anything you could think of can be thrown in on top of that: orienteering, coasteering, roller-blading, caving, packrafting, abseiling, wheelbarrows, snowshoes, ziplining. It just depends on what opportunities are available in the area where the race is held. The legs are often not too challenging on their own, however string them together one after the other for days on end, and some serious sleep deprivation and exhaustion together with the complexities of keeping up with nutrition requirements and maintaining good team dynamics… this sounded crazy and hardcore enough to interest me immediately.

Many years ago when I first met Seb, he was a keen adventure racer and unbeknown to him at the time, he was referred to as the ‘Adventure Seb’ boyfriend in conversations I had with my mum and sister. He competed in the world championships when they were in Tasmania  in 2011 and I had been intrigued ever since. So here was  my chance to have a go at being ‘Adventure Beth’.

I joined up with three local guys from Canberra and we formed ‘Resultz Racing’ team. They were Michael Reed, Tony Leach and Ross Beatty. We had heaps of adventures together training up for the race. We did overnight trips with hiking and biking, day long hikes, paddling and pack rafting. It was fantastic to be training again for something, and this was really different training. It was great to feel a whole of body type strength from all the different aspects of physical activity. We unfortunately did not get to do any adventure racing together prior to the main event.

We had some hiccups leading up to the event which disrupted training right when we should have been putting in the hard yards. Two team members came down with bad chest infections and went on antibiotics, and I got bitten by one of my cats which landed me in hospital with a staphylococcus aureus (Golden Staph) infection in my blood. This was serious enough to need two weeks 24 hour IV antibiotics, meaning I couldn’t train at all.

Needless to say, this is what team racing is all about: getting all four of us to the start healthy and ready to compete felt like half the challenge. But we made it and with big nervous smiles we toed the start line.

Ready to rock and roll

I won’t go through the whole race report because it is epic in itself. There are a lot of stories to be told from racing constantly for 24 hours a day over a very challenging course. My teammate Michael wrote a great account here which details the whole of our race.

Some things stood out though to me, as things I will never forget: 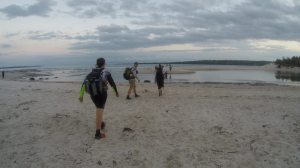 In the end my wrist decided that it belonged to Biking Bethany, not Adventure Beth, and there was to be NO MORE PADDLING! My right wrist had developed severe swelling the size of a lemon and was warm and inflamed. I couldn’t move it and the medic suggested I might have a fracture. And that was that, my race was over. I packed my gear up and jumped into a tent for the night, to be taken to hospital the next day. Teams can continue with three people but my team mates decided they had had enough and also pulled the pin. I ended up with no fracture, but severe tendonitis in my wrist. Intersection Syndrome apparently. The two tendons rub over each other with such friction that the sheaths inflame and swell. Mine was so inflamed when I moved my hand there was a chalky audible squeak of dry tendons.

I really loved the craziness of the race. Everything was just hard enough to feel like you were being tested. Would you break this time? What about now? The legs were long enough that you were completely ready to do the next thing, whatever it was. Get off those weary feet and onto the bike. Be done with the hike-a-bike and get into that kayak. We only lasted three days out on course, but the sleep deprivation was a real tricky bugger even in that amount of time. The hours between midnight and dawn were hard. While hiking on the second night the steps in front of me were rolling and merging into one flat piece of path and I was continually stumbling along like I was drunk. Cycling at night and just staring at the one light ahead on the ground was something I was used to but there was the odd slap of the face to reinvigorate myself. I rediscovered no-doze for the first time since Tour Divide, and it was just as fabulous as I remember.

I found the dynamics of racing with three other people very challenging. All the adventures I have ever done where you are so exhausted and not thinking clearly, I have been by myself. You can scold yourself, swear at yourself, sleep when you need, stop when you need. Having to accommodate the needs of three other people was hard and I think teams who race together often develop together as a real unit. Still, we had a great adventure and a sense of achievement for giving it a good hard crack was felt by all.

So I’ve had some time off. Time to heal my TD wounds and time to try my hand at new things.  I liked the idea of Adventure Beth, but I am not sure if it liked me. One thing I am sure of though, is that it awakened the fire. I am so excited to be fit and ready for new challenges. There are adventures ahead, so watch this space cause Biking Bethany is back.