The finish to MBC was not so great for The Seb and Biking Bethany.

Stage 6 was 170km with the first 50km or so being dead flat and super fast. It was really cool to be riding in such a huge bunch but I was working hard to be there. As the fury was unleashed up the front, riders were going down all around me. People losing control in sloppy mud puddles and loose sand and hitting the deck pretty hard.

At about 50km we passed through the feed station. Some people stopped to pee, others stopped for water. I struggled to locate my bottle and by the time I grabbed it and got going the bunch was gone. I buried myself to get back on, and having spent way too much energy, I ended up dagging off the back in no time.

All of a sudden I was alone.

The hills were big rollers, as far as the eye could see was an ocean of dry coloured grass. The sky was a pretty blue. But that was the last I noticed of the scenery for the day.

As I stopped to lube my chain I noticed that a bunch of a few riders were approaching. Forgetting about the lube I jumped on and rode away with the group which included Bleeksie. Soon though, I started to slow rapidly and it felt strangely like bonking. Hitting the wall. I refused to believe it and scoffed down a gel and then some Gu chomps.

Then my stomach started cramping. It felt like my stomach was turning inside out. I limped along for about 30 minutes, making a whimpering sound and barely turning the pedals over. On the verge of bursting into tears, I turned around to see Seb right on my wheel. He said hi and looked at me in a “you look like you are about to die so I’ll be polite” kind of way.

The Seb had had terrible tyre and pump drama and was happy enough to ride the remainder of the stage with me.

Eventually I perked up a bit and my stomach settled a little. I was able to sit on the Seb train all the way to the finish. It was really really nice to have been able to ride together and I was a wee bit emotional at the end. Erik managed to snap a great photo of us. 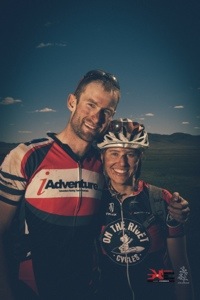 That night Seb was very unwell and I was feeling queezy too. We went to bed knowing something was brewing in our bellies.

By the morning of the final stage, Seb and I had developed some type gastro. I was unsuccessfully trying to pack my bag between dashes to the toilet and about 15 minutes to race start Seb walked back into the Ger saying he’d crapped his dacks. Doh.

We both struggled through the 86km of stage 7, just doing what it look to turn the pedals over and get to the finish line. In the last 5km we could see the finish line and Ger camp up on the hill to our right. But in true MBC style we rode around and over the entire hill, practically circling the camp before even getting close.

That finish was just like the first stage; a slap in the face. Ugghh. Done. It was hard to feel satisfaction when anger was still burning in the quads after that nasty finish.

After a while though, the pain eased and I started exploring our 13th Century National Park Historical Ger Camp. It was easy to imagine we were there with Genghis and his army.

Mongolia Bike Challenge surely delivered. It was true to it’s tag line. Like no other race on Earth. The race was hard and the satisfaction of even just crossing the finish line was enormous. The Mongolians were charming and generous people; it would have been nice to spend some more time in the country experiencing the culture at a more leisurely pace.

We did it tough, with a combination of various illnesses and mechanicals… but all six members of Team 3Fidi Nimblewear crossed the line of MBC!

Well done to Bleeksie who won the veteran category, Nathan and Seb got 2nd and 3rd in sportsman. Cam, Marina and I, well, we finished and that was pretty awesome 🙂

Unfortunately and often to my own detriment, I am a fiercely competitive and stubborn person. Happy to admit this. So telling myself to take it easy, just get through these first few days of Mongolia Bike Challenge with minimum effort, that was a hard thing for me. But I agreed with what others were telling me and faced with the only other option of not starting the race at all… well that wasn’t an option!

As we were speeding away from the larger than life stainless steel Genghis Khan statue, my ‘race autopilot’ took over. Vying for wheels, trying to get a good position, hanging onto that front bunch. God they were going fast!

Needless to say, by the first hill I was in no-man’s-land: dropped off the back of the fast bunch, overtaken by a few other smaller groups, but ahead of the back markers. My heart rate was high.  By myself with no vans or other noises about, I could hear my heart pounding like it was going to explode out of my chest. At the top of the second hill I was wheezing and gasping for air, in between coughing up chunks of gunk. Not even 50km had ticked over yet…far out, this is going to kill me.

These were not hills, these were mountains! But at the top of each climb, from what felt like being up in the clouds, the views were spectacular. The scenery throughout the day was so varied; vast open plains, huge grassy hills, rocky peaks with crazy-fast descents. The sections of spruce and pine trees offered some respite from the hot sun, but they were vary rare. We learned later on in our travels that only about 9% of Mongolia is forested.

That day turned out to be super hot and a lot of people got cramps and dehydration. I rode by myself a lot towards the end but made good friends with a few of Spaniards, including the lovely Caterina, who I ended up riding with for the first three stages.

A fellow racer described the stage perfectly “That was not a welcome to Mongolia hug, it was a slap in the face”. Ouch! The relentless hills were tufts of grass that made climbing bumpy and slow. A lot of the hills finished with a steep pinch that meant walking was the only option. My garmin recorded 120km and 2500m of climbing in 7 hours. Nearly double the scorching time set by Cory Wallace.

Immediately after I finished I went to our Ger. Sitting on the floor, all covered in mud and cow shit, quite dehydrated and completely shattered, I questioned my ability to actually ride my bike the next day. I certainly hadn’t expected the terrain to be so physical and demanding.

Thankfully, starting early in the mornings meant we had the afternoon to debrief, shower, clean bikes, refill water bottles for the next day and eat. Did I mention eat? This week was going to be a race of attrition, and even just lining up to start the next day meant eating eating eating! By the time I crawled into bed I was feeling satisfied. I made it through day one and I was still alive.

I reckoned that the next morning would be it, the make or break. I was either going to wake up horridly sick and unable to race, or my body will have gone through the recognition phase and accepted that yep, this was happening so better get used to it. Sunrise would tell.

Most pictures ©  Erik Peterson, others by and The Seb 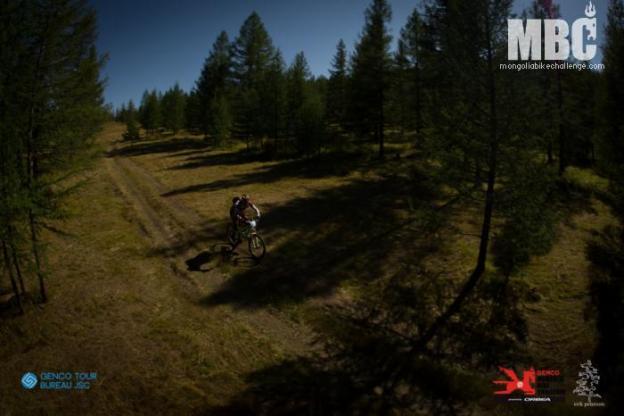