Last weekend saw the completion of the 2013 edition of  Round the K in a Day. This is a 320km one day ride starting and ending in Jindabyne NSW, with over 6km of vertical too! I bailed, mainly due to lack of fitness, but the boys from last year and a few others took up the challenge again.

They seemed to make it around fine without me, upping the average speed by about 4km/hr over what I could manage last year! And possibly a new record time of 12:22 hrs (moving time)? Nice work lads! Some piccies and data on Matt’s strava here: http://app.strava.com/activities/99005471.  Well done to you all! I’ve set myself the goal of rounding up a ladies bunch to complete the whole thing next year and I have two ‘definitely yes’ already.

Anyway, instead of this torturous epic, this year I was coaxed into heading down the NSW South Coast for a weekend at Sebs family’s new beach house. Merimbula is a perfect location to chillout but for those of us who can’t manage a day without some form of active pursuit, it is also a pretty cool place to get active!  Kayaking in the inlet, swimming at the beach and mountain biking within a few minutes ride of the house. We had heaps of fun exploring the mountain biking trails at Mandini, Manna Park and Tathra. 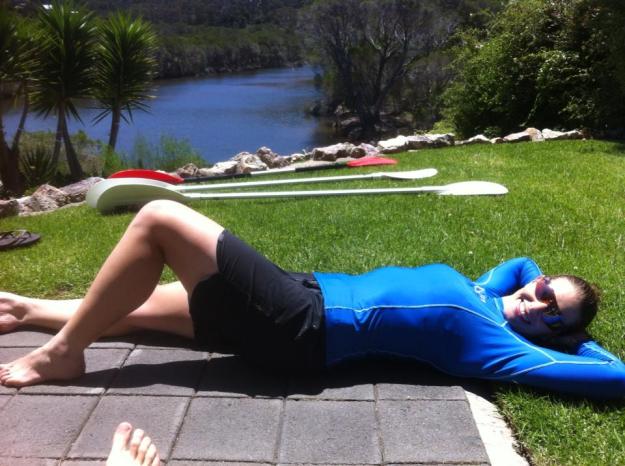 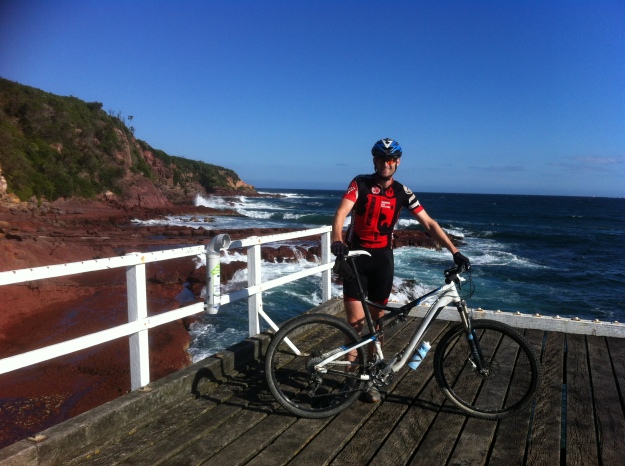 And finished it all off with some of this… 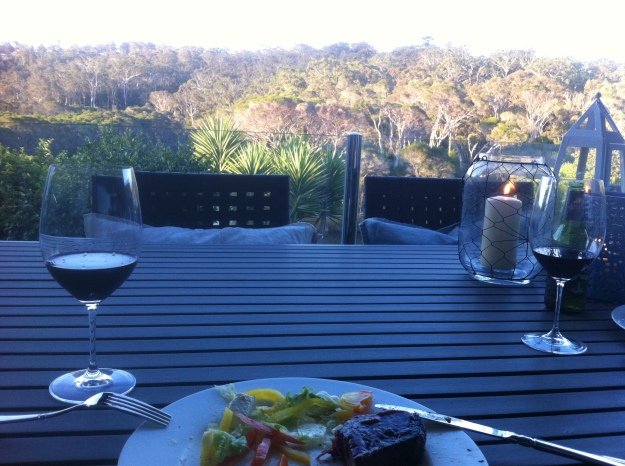 Now we are off to the USA for three weeks of playing tourist with no bikes at all! A sister’s wedding in San Diego and a white Christmas in Chicago. Bring on the Christmas cheer!

On Easter Friday morning Seb and I set off from Canberra on our bikes, headed for the town of Tathra on the NSW South Coast. Our 300km planned route headed down Boboyan Road through Shannons Flat to Cooma, then East through Wadbilliga National Park, Cobargo, Bermagui and then South to the mtb haven of Tathra.

We had given all our ‘normal’ clothes to our friends who were driving down and so we just had a little bit of gear for the ride and one night camping.

In the beginning the going was fairly slow but it was a cracker morning as we headed South towards the mountains. I have ridden to the end of the bitumen many times on my roadie but definitely never ridden over Fitz’s Hill on a gear-loaded mountain bike!

Unfortunately our scenic ‘back route’ was completely spoiled by bogan 4WD drivers heading off to Lake Eucumbene for the weekend. There was a lot of traffic and they were not nice drivers either. You could hear a majority speed up as they overtook us, leaving us with our hearts in our throats in a cloud of dust.

The views were classic and we tried hard to focus on that, trying not to let them ruin our day too much. We stopped at what is nearly the highest point on Boboyan Road where the lookout offers views toward Yankee Hat and Mount Gudgenby. Beautiful! 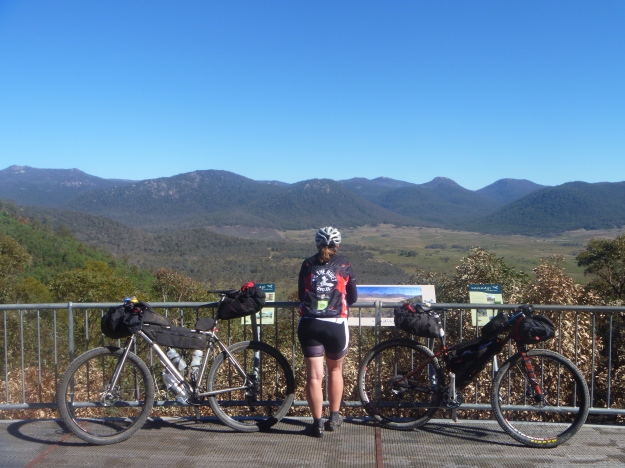 We rolled out of the national park and through Shannons Flat, which I might add, is not as flat as it sounds. We got to Cooma just after lunch and gorged ourselves on McDonalds and Subway.

The next section of the ride was on bitumen as we left Cooma and headed to Numeralla. We met some other cycle tourists at the start of the dirt road into the Wadbilliga National Park, though with the huge amount of gear they had (including a bottle of wine) they wouldn’t be venturing too much further that afternoon.

With the setting sun we entered the National Park and the roads turned rough. We were both riding rigid and the large sized rocks made it hard to ride smoothly. We pressed on into the dark, keen to get to the campsite at the bottom of a 900m descent so we could sleep a bit warmer!

The descent was hard. Very rocky, very steep. My bar mounted dynamo light was shaking and flickering so crazily it was like I was in the middle of a disco. Brakes heated up and we came squealing to a stop at Wadbilliga campsite next to the river. The campers wondered what the hell had just arrived in the dark making that noise and stumbled out of their caravan looking confused.

With 185km in the legs and over 3000m of climbing, we quickly ate Subway in the tent (thanks for carry it from Cooma Seb) and fell asleep easily to the sounds of the peaceful Wadbilliga River.

The next morning we ate squashed and semi-stale McDonalds muffins and doughnuts while trying to convince an old German guy that his Subaru was going to really struggle towing his huge caravan up that 900m rocky, loose climb. He didn’t seem phased. I bet he didn’t make it.

There was a big climb to get back out of the park, where we emerged in lush green cow farming country.

Arm warmers and vests were off, sunscreen was on – we were bound for the coast now! Our last 60km was on the rolling bitumen roads to Tathra and to be honest nothing too exiting happened! We stopped for a great hamburger in Bermagui though. At one point we rode past this maddog old dude old walking his dog. He was only wearing a pair of running shorts and a cap. As Seb rode by he tipped his cap and said “Morning Boss”. As I rode past he said simply “Mrs Boss”. Something I’ll remember that for a long long time.

We arrived in Tathra for a long weekend of sunshine, sweet singletrack, hanging out with friends, lots of cider and a wicked coast house with an in-built sauna!! Nothing like the satisfaction that you rode your bicycle from Canberra to the Coast! Oh yeah, we definitely earned our chocolate this year!